im gonna cry, i feel this really hard; no one i know who is like us is okay, and im someone who got lucky,

we all have eatch other and thats what matters

at least to me

I just recently found this site, and even more so came across your games and animations. Thank you for taking the time to create something so tragically beautiful.

Chilling epilogue. Thank you for making this

Thank you for watching this.

I'm going to be honest, He Fucked The Girl Out of Me was originally going to be a 3rd part to Saving You From Yourself but I scrapped it and decided to just write more truthfully and not hide behind stuff.

Arle "selling her video games" ignored what kinda happens when just selling your video game collection isn't enough. Denise was a proto-Sally or at least cut from the same cloth of people Sally was made from.

In the original storyboards of He Fucked The Girl Out Of Me, Denise was Sally and she only mutated into Sally later on after a few rewrites.

Also, almost no one every watched this, even for the event it was made for, so seriously thank you for watching such an obscure thing. You are hardcore and I really appreciate it.

Well told and tragic. I like the art style.

I don't know how I missed this comment but omg, thank you for being like almost the only person to ever play this. 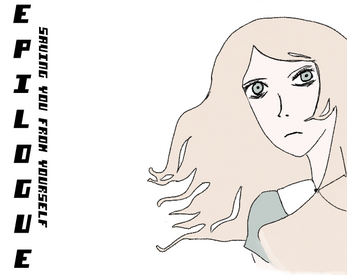